The Coming Tidal Wave to California 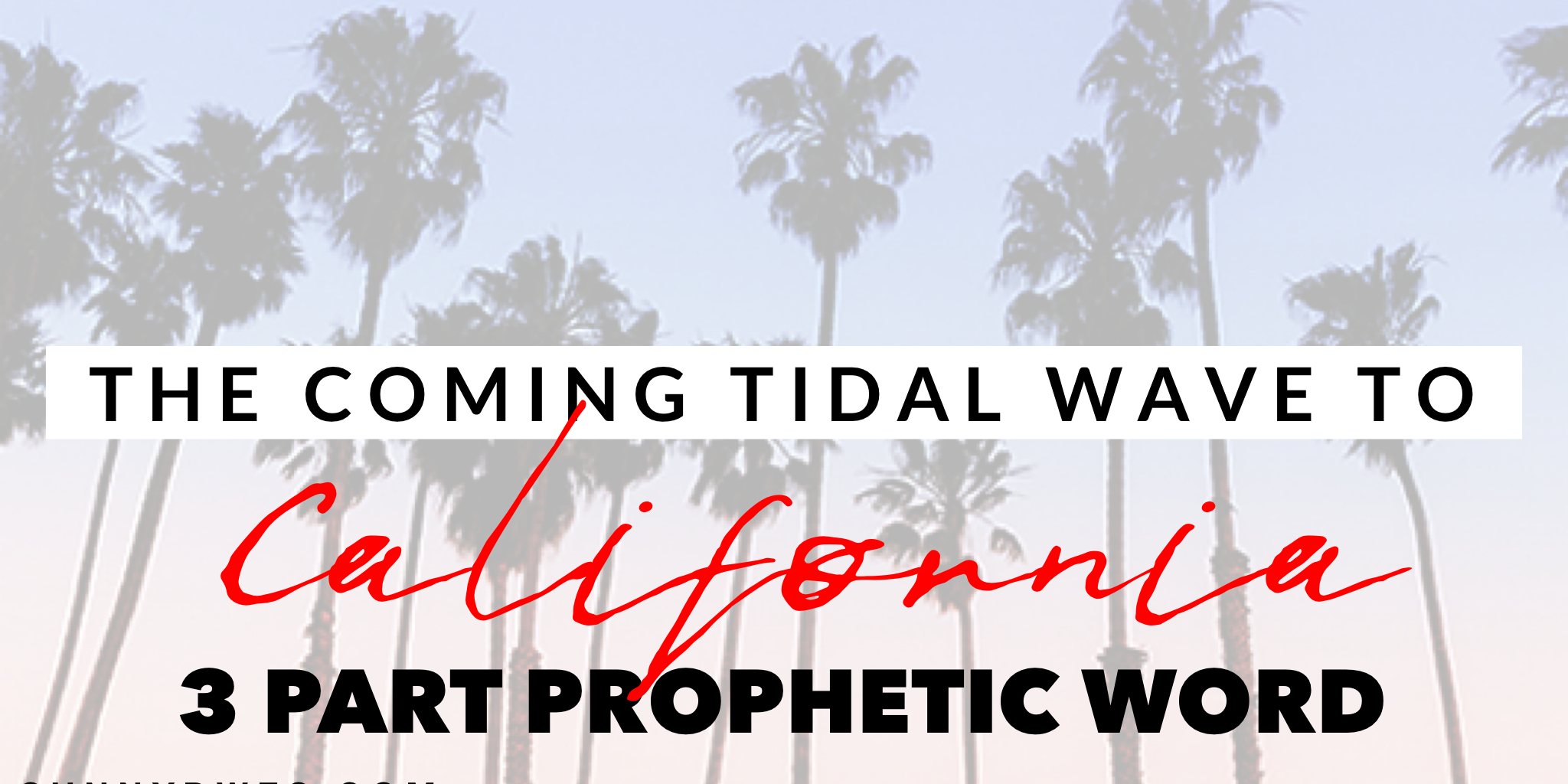 In the beginning part of October the Lord brought me into several encounters and visions concerning California. As I meditated on these the Lord brought it together for me in a 3 part prophetic word: Closing the Curtain, The Firestorms, and The Wave of the Future.

California was now hidden from the rest of America.

When I asked the Lord what is happening He said “California is changing.” In these words were various understandings. The first being the curtain was like one you use in a fitting room and California was changing it’s clothing and the curtain was hiding the nakedness of California much like He did for Adam and Eve in Genesis 3. Rather than exposing California the Lord is hiding California from being scorned, embarrassed, or judged for it’s nakedness. Another understanding was this heavenly curtain was a cocoon which California was being put in as it goes through a transformation or metamorphosis. Many people emphasize the darkness they see in California. But like the woman in Song of Solomon when she refers to herself being dark yet lovely (from working in her brother’s fields in the scorching sun) and her beloved responds with all the beauty he sees in her and never once acknowledges her “darkness”, God is seeing the beauty in California. Out of this cocoon will come a beautiful monarch butterfly!

Sub-contextually California was being separated from the rest of the states. This separation embodied the Hosea 2 verse:

“But once she has nothing, I’ll be able to get through to her. I’ll entice her and lead her out into the wilderness where we can be alone, and I’ll speak right to her heart and try to win her back.” – Hosea 2:14, The Voice Translation

God is not done with California. He has not given up on her.

I will preface this with a clear statement. What I saw in this next part of the vision was not literal or something I believe will manifest in the way it is described with imagery and that it is metaphorical.

I was brought behind the curtain where I could see all of California from an aerial view. From within there was a sense of calm. The curtain had a majestic nature about it that caused to appear to be more like a waterfall cascading from the heavens instead one giant piece of cloth. It had a shine to it that was tangible. The only way I could describe it would be to say it looked like oil with gold flakes inside of it, or to be the Glory of God.

From San Diego to the most Northern parts I saw fires burning. These were not wild and uncountable fires by no means but very much controlled fires.

As I got closer to the fires I saw that were not fires at all but actually these were homes. I asked the Lord why these homes looked like fires from above which He replied “This is the fire storm I am sending California. There will be groups of burning ones that will gather in homes all across California and I will consume them because I am a consuming fire. These burning homes will shine bright and men will come to them in darkness for refuge.”

for He is like a fierce fire that consumes everything. – Hebrews 12:29, The Voice

From what the Lord was saying I knew the He was referencing that as the times in California get more challenging for those of Christian faith there be places of sanctuary and presence. These homes will be marked as such. Similar to in times past when Christianity was outlawed sailers changed the design of their anchors by adding a cross bar creating a cross out the anchor, a symbol of hope to those who looked for a light in the midst of troubling times.

These houses of fire will be that sign of hope.

The Wave of the Future

While participating on Facebook broadcast with a friend I went into a vision. Off the shores of the Orange County area of California I saw a large wave begin to form. It was quickly growing and growing massive momentum as it was approaching the beach. This wave was of epic proportion and though I don’t surf I imagined it to be a surfer’s dream, something that would only seem for bonfire stories but never seen. When the wave came crashing down on the beach people walked out of the wave.

For no other thinkable reason other than the Lord this made me think of the baptisms that would take place during the Jesus people movement with Lonnie Frisbee.

“This is my new Jesus people. They will carry an anointing similar to Lonnie, they are your modern day hippies. Your millennials are my Jesus people.”

Much of the church especially prior to Lonnie Frisbee looked at the hippie culture as a band of misfits and rebels. Likewise, the church is baffled by this millennial generation but God has a plan for them.

For I know the plans I have for you,” says the Eternal, “plans for peace, not evil, to give you a future and hope— never forget that. – Jeremiah 29:11

God is choosing this generation to breathe on and they will be His Jesus people.