God is Not Done Yet 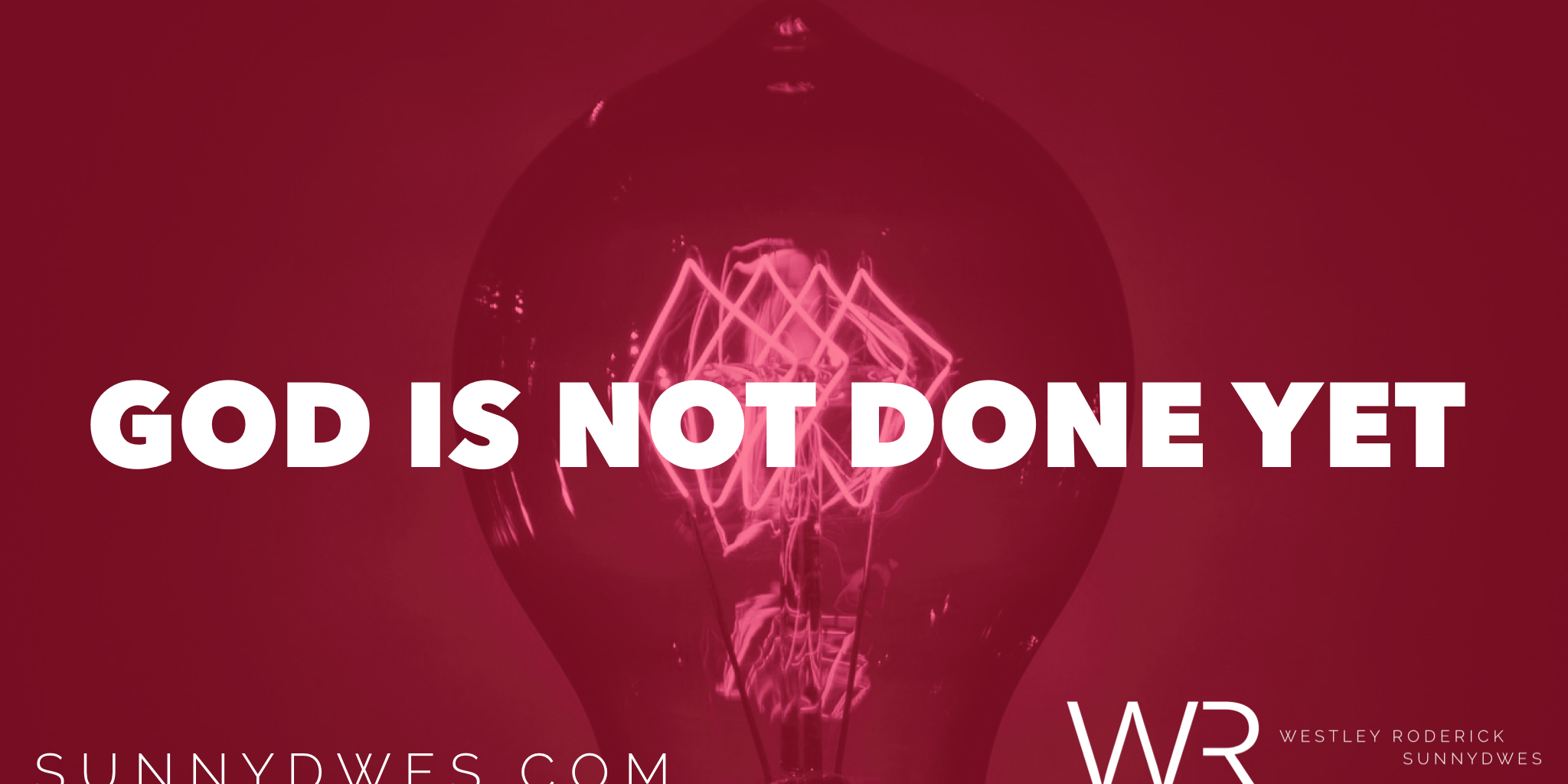 God is not done with you yet. He isn’t finished, He hasn’t given up, and He hasn’t stopped.

If there is anything about you contrary to the divine identity within you, God will perfect it through love and compassion. He will bring whatever it is about you, that is not the true divine identity of a son or daughter, and He will bring it into perfection. You have to trust that you are in a process right now, and it is a lifelong process.

I am confident that the Creator, who has begun such a great work among you, will not stop in mid-design but will keep perfecting you until the day Jesus the Anointed, our Liberating King, returns to redeem the world. – Philippians 1:6 The Voice

You are on the potter’s wheel right now. God is not stopping on you midway through the process. He works through the impurities in the clay, softens it, massages it, smooths it out, until it is supple, like flesh once again. He takes the heart of stone and replaces it with a heart of flesh. He, who has called you, will walk through it with you.

May God himself, the God who makes everything holy and whole, make you holy and whole, put you together—spirit, soul, and body—and keep you fit for the coming of our Master, Jesus Christ. The One who called you is completely dependable. If he said it, he’ll do it!  – 1 Thessalonians 5:23 & 24  MSG

The one who calls you by name is trustworthy and will thoroughly complete his work in you. – 1 Thessalonians 5:24 Passion Translation

God knows you by name. You are not just a number. You are more to Him. Something happens when you hear Him speak your name, like when He tells you that He loves you. He’s got it under control.

I asked God once, “What does trust look like?” And He said, “Trust is when you can take your hands off of the plow, and know that the work will still be done.” Rest and trust are synonymous. The One who calls you by name is trustworthy. He won’t forsake you, and He won’t leave you. He abides with you. He will do whatever He said that He will do, because God is not a man, that He should lie.

The gifts of God are without repentance.

And when God chooses someone and graciously imparts gifts to him, they are never rescinded. – Romans 11:29 Passion Translation

You see, when God gives a grace gift and issues a call to a people, He does not change His mind and take it back. – Romans 11:29 The Voice

God is not apologizing for gifting you, and then taking it back. He’s not going to change His mind. That’s how faithful God is.

King David was anointed as a boy, and then what happened? He had to serve his brothers and he was returned back to the fields with the sheep. How many of you know that you are called to something, but you are trying to figure out where you are at? Where you are at does not determine where you will finish.

He, who will start a process in you, is faithful to continue that process in you. You are called to be a king, but the anointing that is on your life is currently chasing you to kill you. You are hiding in a cave. King David hid in a cave, because his calling, his destiny, was trying to kill him. Where you are at doesn’t determine where you will finish.

Then, David messes up. He’s now king, and he messes up. He commits adultery and then murders the husband. Sitting there, Nathan confronts him. Where he was at in that moment did not dictate where he was finishing. Even if you are in the worst of sin, it will not dictate where you finish. All you have to do is repent. In Jewish culture, repentance means “go live the way that you were always intended to live.” Anytime that you are living outside of your calling, it is like being enslaved to the very thing that you are living according to, at that moment.

When Your Brothers Sell You Out

You can be like Joseph, in the prison. Joseph, favored by his father, has a dream. His brothers are going to bow to him. So, the brothers got together and said, “What are we going to do to him? Should we put him in a hole, or kill him?” Then, they decided to sell him. Joseph was favored by His father, but now he’s with the Egyptians? Have you ever said, “I have this amazing call on my life, I’m anointed, and my father favors me. Why am I here, in the world?”

Egypt represents the worldly system. Many people don’t recognize that the calling and anointing on your life, the dream that you’ve been having, and the reason that you have the favor from your father, is so that you can go speak to Pharaoh. He has a dream that needs to be interpreted. That’s the breakthrough and that’s the ministry that is on your life.

When Joseph was reunited with his brothers, he said, “What you intended for evil, God has turned to good.” We use this verse out of context, a lot of times. His brothers sold him into slavery, not the devil. Listen to what God says to you, when it comes to your identity. The voice of the Lord is over the sound of many waters, and breaks the cedars of Lebanon. It is time to get out of where you are right now, and step into where you are supposed to be.

I had a dream a few weeks ago. In this dream, I was going on a trip with some of the Fresh Fire Ministry Road Team. We went to the airport, boarded the plane, and I knew it would be a long flight, so I took a nap. When I woke up, in my dream, I wasn’t where I was supposed to be. I was in Australia. I didn’t know where I was supposed to be, but I knew that it was not in Australia.

When I got off the plane, I spoke with the airport staff, and asked how I had gotten to Australia. They apologized, and said that somehow, while I was asleep, I had shifted planes, and ended up on a plane landing in Australia. We were all perplexed. I wasn’t mad or angry about the situation, but I didn’t know what to do.

There was some time before I could leave. While in Australia, clothes and food were given to me, and people were giving me their cars, houses, and money to spend! They gave me everything that I would need. There was so much grace and favor for the time that I was in Australia, even though I wasn’t supposed to be there. I was dumbfounded by these people taking care of me.

Then, I got a phone call from the airline. They had my flight ready, to get me where I was originally going, and they had good news for me. I was going to be sitting in business class. They were going to upgrade my status! I was excited by the news, and then woke up.

The Lord spoke to me, after the dream, and said, “You have to be open to an alternative destination. Here’s what you do when you are stuck, or in a holding pattern.”

1. Stay in Your Assigned Seat –

Staying in your assigned seat is for your protection. They are going to look for you there. So, don’t panic and scramble.

2. Fasten or Secure Your Seatbelt –

Make sure that you are secure where you are at. This has more to do with your identity, than feeling safe. Being okay and comfortable with where you’re at, with what you’re doing, and with what is going on in your life, is far more important than you can imagine or realize. It’s really pertinent to your confidence. It’s becoming secure with who God has called you to be.

It does no good to bicker, whine, and complain, if you can’t hear the pilot. The pilot knows what is going on. The pilot is your spiritual leaders and Jesus. He is going to make announcements about where to go, who to be, and what’s going on. Listen for the pilot.

4. Be open to an Alternative Destination –

Be willing to land in a different airport, land or city. In Habakkuk, it says to make the vision simple and plain. However, we have made it complicated and convoluted, with a lot of details that are probably from our own wants and desires. When you make it simple, you have a framework, and it is adjustable. When it’s simple, and allows for an alternative destination, it doesn’t feel like a violent shift. It’s like changing the tail fin to go to a different place.

Jesus was put into the earth, to die on a cross, after being baptized, and then driven out into the wilderness, by Holy Spirit. Yet, Jesus returned upgraded in status. He returned in the power of Holy Spirit.

When you allow yourself to be put into that alternative destination, there is favor, provision, safety, and grace, for where you are, and where you are going.

Stuck in a Whale of A Place

Jonah was supposed to go somewhere and deliver a message, but he didn’t want to. He ended up in an alternative destination. He found himself in the belly of a whale.

Jonah 2:1-10 — Being delivered from where you are at is as simple as doing what you were originally asked to do.

If you are stuck right now, and feel like you are going through hell, the key to your breakthrough is repentance, living the life that you were meant to live, and doing unto the Lord, what you are supposed to be doing.

Because, God is not done with you yet. Where you are right now does not dictate or determine where you will finish. If there is anything about you that is contrary to the divine identity within you, God will bring it into perfection, through and by His love.

This generation has been anointed before it’s time. There was a preparation time that has had to take place, growing in maturation in the things of the spirit and in the natural. Like the young David, anointed to be king, but right back to the fields taking care of sheep, this generation was anointed and called to greatness before its time and have been in the fields, tending sheep, and fighting off the bears and the lions. But God says, “If you cry out to me and return to who it is that you are supposed to be, and repent, you will find grace, favor, safety, and provision, for where you are right now, and where you will be going.

Live! Live the life that you were meant to live, live to the high calling that’s been placed upon you, and live according to the destiny that is on your life today.