Parliament of Prophets (Part 1 of 2) 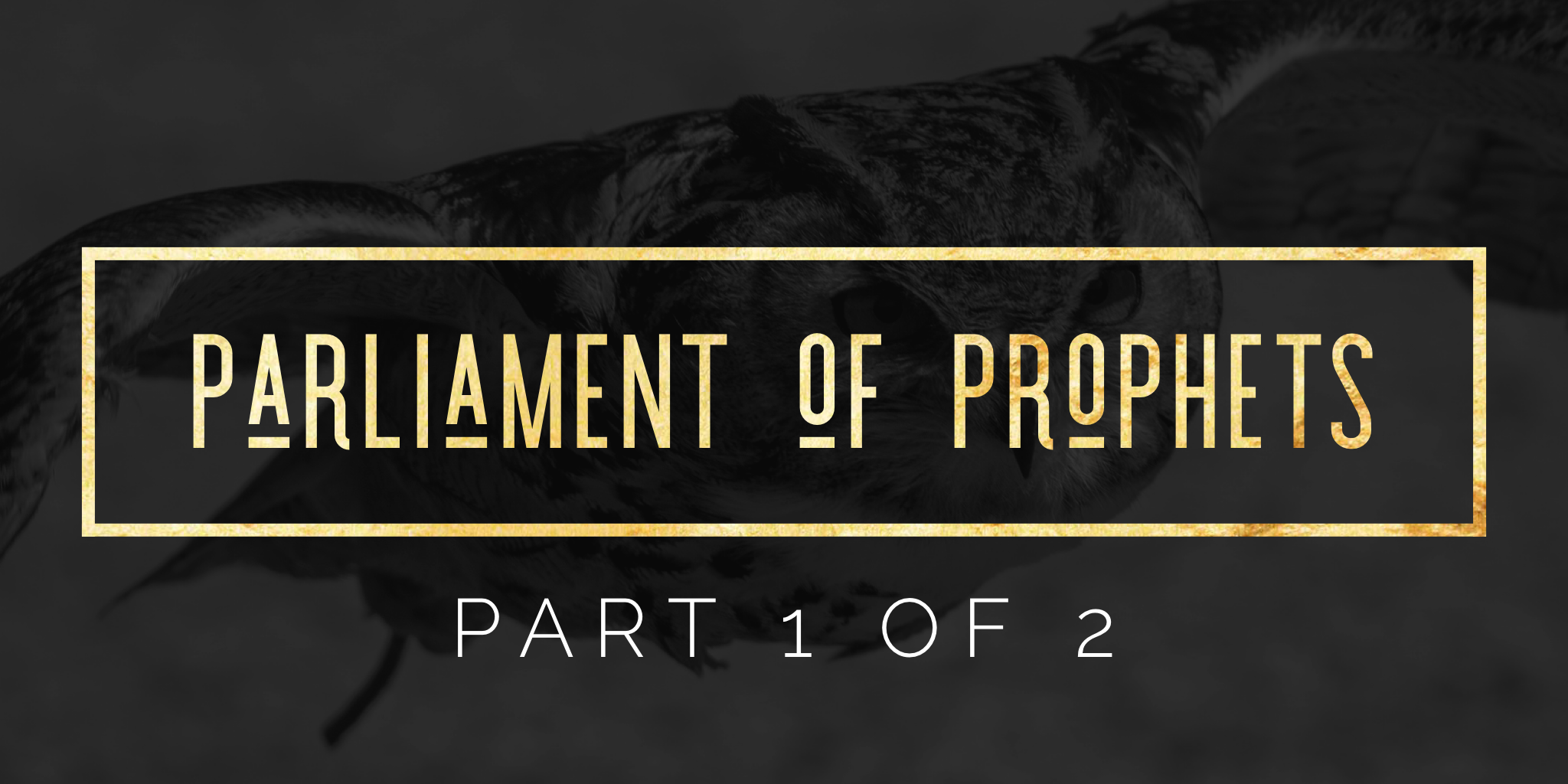 Several months ago, I was awakened in the very early morning by the voice of the Lord. I heard, “I’m raising up a parliament of prophets.” Prior to this moment I already had knowledge that a grouping of owls is referred to as a parliament. It wasn’t just that God was speaking to me there were be a collection of prophetic people but that they would have characteristics similar to that of an owl.

The Lord said, “I am going to breathe upon these individuals in such a way that they will begin filling up my house with brothers and sisters.” We have been given and charged with the word of reconciliation. He said, “I am going to cause it so that these people will go out into the darkness, into the very darkest of places, during the worst of the worst situations.

The Lord was referring to a parliament because owls have an impeccable ability to see through the darkness and have highly developed hearing. It is said that owls have a 100% strike ratio while hunting under the cover of darkness. In addition to that, owls have an ability to turn their head in a 270-degree view of their surroundings giving to a plane of sight. All of these additional abilities that are proprietary to owls are what make this bird a great metaphor and symbol for the coming prophetic movement. This collection of prophetic people will have the counsel and the wisdom of the Lord on how to strike with accuracy to break the shackles of darkness.

In correlation, the Lord is saying that in the next prophetic movement, “I am going to be raising up a movement of people that will be able to reach for those in the darkness and bring them back to the nest.” God is going to breathe upon a group of prophetic voices whose sole purpose, whose calling and gifting, is the ability to go out into the darkest of places and bring people back to the nest. The nest is figurative for the Father’s house.

The purpose of this movement and the gathering of owls that He is referring to is to gather souls in the cloak of darkness and bring them back into the Father’s house, into the Kingdom of Heaven. There is an anointing and a covering to go into the dark places where people are afraid to go on a regular basis and rescue the lost. These prophetic people will have the ability to see with a wider peripheral vision than others. Their ability to see into the darkness will be nearly perfect, and it will give them a 100% strike ratio. That means that when they bring somebody into the Kingdom, there will not be a whole lot of lollygagging or frolicking around. The way they will operate, function, and move about will be very precise, strategic, and carried out with wisdom and stealth.

In Matthew chapter 9, we see that Jesus was eating and drinking with the sinners and tax collectors. Many people came up to Him and said, “Why do you sit here and eat and drink with sinners and with the tax collectors?” And Jesus says, “I can tell you to go learn the meaning of the Scripture that I desire mercy and not sacrifice.” Jesus is right there in their midst. The spirit of prophecy is the revelation of Jesus.

Therefore, the Father is raising up prophets that will abide in the darkness for the sake of bringing light. God Himself hides within a dark cloud. This new order of prophetic people is going to be there with peripheral vision and will be able to see wider and further into this darkness. They will be able to hear and know the Father’s voice. That is a promise that we have from the Father. “My sheep will know my voice.”

He said, “I Am going to breathe upon people.” We are going to see a marking of Joseph and a marking of Daniel upon a prophetic movement and the remnant of people.

If you look at the life of Joseph, his brothers traded him off into slavery. He was raised up with, lived amongst, worked and operated for a Pharaoh. Most prophetic voices in Scripture typically operated in the light of being a consultant to a king or to somebody in great power, authority and influence. Joseph had the ear of a Pharaoh.

Some of us need to come into a place where we can begin to have the ear of a Pharaoh and to where Pharaoh can learn he can trust us and therefore, will listen to us.

In that process, scripture is misrepresented causing a mindset of feeling betrayed by the church and constantly battling with a constricting feeling inside those four walls.

When you look at Joseph’s life, he says “what you intended for evil, God has turned to good.” We often interpret this scripture by saying “what the enemy intended for evil, God will use for good.” However, let’s look at who betrayed Joseph in that moment. It was not the enemy. It was not Lucifer. It was not Satan. It was, in fact, his own brothers who betrayed Joseph. They became so jealous and so insecure of his gift that they tried to get rid of him.

Maybe you’re feeling like you are having a hard time and struggling to find your groove in a church. Maybe God is not calling you to be a prophet or a prophetic voice inside the church but rather He’s calling you to be inside Pharaoh’s camp. In the marketplace, in the wilderness place, but instead you want to be in the place that shines.

Prophecy ultimately brings and hooks people in to reveal Jesus to them. We have been using prophecy as a show mechanism inside the church when in all actuality, almost every reference point of Scripture, specifically in the New Testament, we see that prophecy is to reveal the heart of God, to reveal the secrets of their heart, and to reconcile them back to Christ. To reveal Jesus who died for them, so that He can have a relationship with them.

The Joseph anointing is going to come upon a group of people and God is going to bless them the way He blessed Joseph. This isn’t limited to just dream interpreters; Joseph also acted as a consultant. The Joseph anointing comes with a wealth and a power to create and build wealth. God wants to move on a people group that can operate as business consultants and speak to “Pharaoh” out there in society who needs that connection to God.

God wants to use you as a bridge, but you are so busy trying to find and get a hold of the microphone inside the church that you are not taking a hold of the calling that God has given you.

This is why many people are feeling so uncomfortable inside the church with their calling and gifting. They are meant to use their gift, their calling, and their voice outside of the church so that they can begin to influence people for Jesus and reveal to them who Jesus is outside the church. Sometimes that’s through acts of love and kindness, and other times it’s demonstrating what Jesus did, and reveal the secrets of their heart using prophecy.

I am NOT saying that you don’t need to be a part of a local church or body. I am saying that maybe your gifting is not made to function inside the church and you are seeking a platform in a place where you are not meant to have a platform.

Many have not been experiencing the favor of God or man because you are not operating in the place of where you are supposed to be.

True marketplace ministry where the Lord is speaking to you and giving you creative ideas and ways to create money and wealth. You have business influence and savvy that God uses that reveals who Jesus is on a greater scale and platform.

When you begin to do that, you will begin to see the favor of God and man upon your life.

The other prophetic anointing that we’re going to see is the Daniel like anointing. There are different lifestyles that are attributed to these individuals throughout their existence. There are several people that are going to live a certain lifestyle.

When you look at the lifestyle of Daniel, he was another person that was working and operating amongst Nebuchadnezzar, a king with a dream that no one but Daniel could understand and interpret. Daniel led a set-apart life that created greatness within him for a moment just like this. This is an example of the parliament of prophets that God is raising up. These people are going to operate in a realm of darkness that many people are afraid to go into.

We are going to see a select group of people, that have set themselves apart, that are going to become like Daniels and Josephs. They realize that they’ve gone through the season of rejection and being outcast, and they’ve been out in the wilderness and been left to die for a set apart reason. For a greater purpose and a greater glory.

You may find yourself in a place of pressure like the lion’s den. This is the place that God is using to build and establish you. Let the Lord be your rear guard. Do not bow to pressure and do not bow to Nebuchadnezzar.

You may find yourself in a very heated situation, but suddenly there’s a fourth man in the fire. When you begin to think about it, God has your back no matter where you are. You are called to live a set-apart lifestyle and its ok if everyone cannot understand it.

Some of you are called to live a set-apart lifestyle so that the Lord can work through you and with you. Some of you feel like Joseph. Why is the family of God rejecting me? They’re not rejecting you! This is not the place for your ministry to be built and established. God wants to build and establish your ministry in a different spot, in a different place, because it serves a greater purpose than what you could ever imagine.

When you begin to step outside the four walls of the Church, you will see the favor of God and the favor of man come upon your life and it will rest upon you, opening doors that you could never imagine.