The Spirit of Prophecy on the Church Today 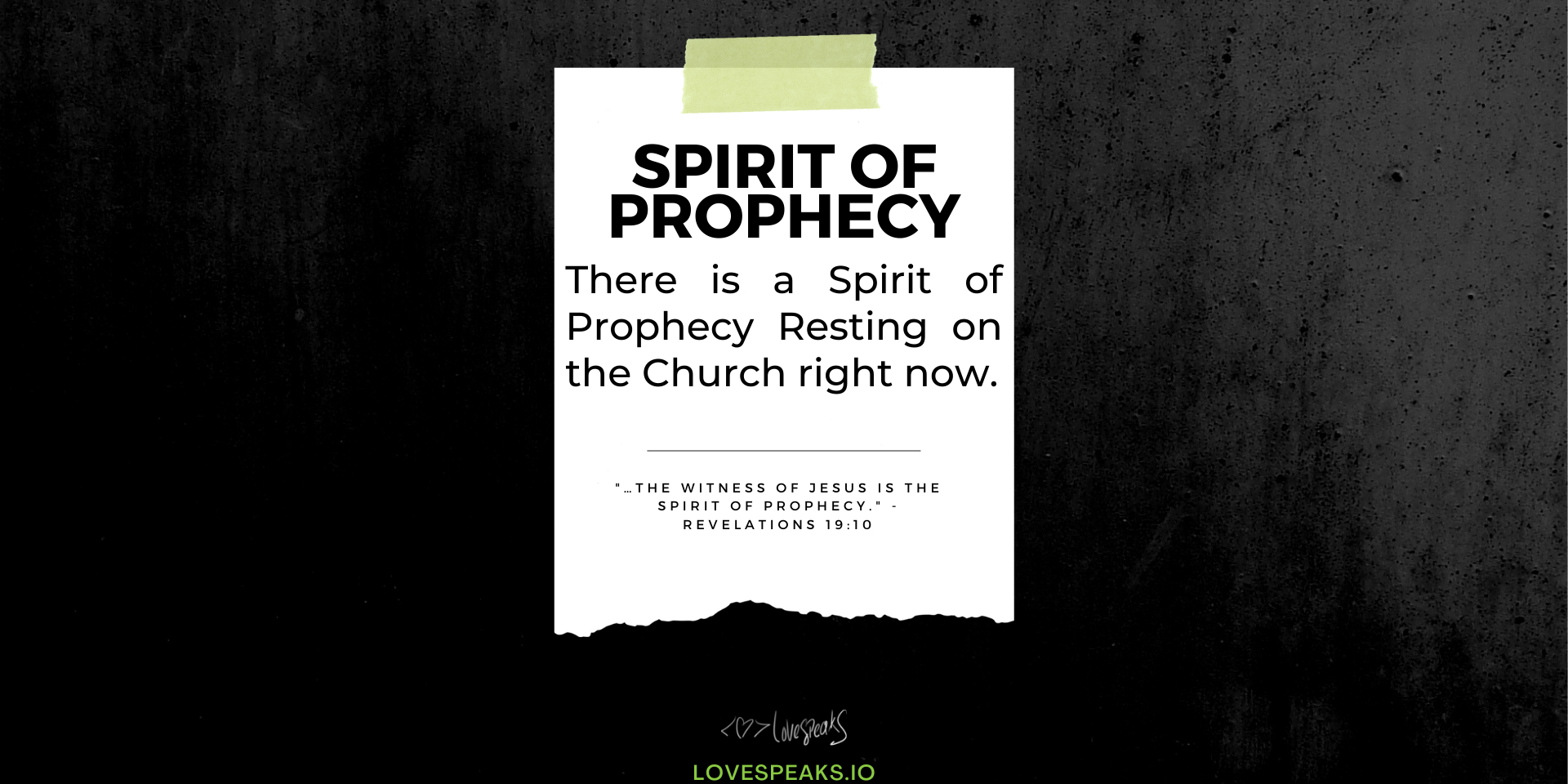 There is a Spirit of Prophecy Resting on the Church right now.

We understand that the Spirit of Prophecy is the testimony of Jesus, or in other words, the Church is proclaiming the nature of Jesus for all to see.

“…The witness of Jesus is the spirit of prophecy.” – Revelations 19:10

We are in a season where listening will be far more necessary than responding, needing to understand more than being understood. We need to be slower in responding and reacting, be very quick to listen to what is said or, in some cases, what is not communicated but implied.

“My dear brothers and sisters, take note of this: Everyone should be quick to listen, slow to speak and slow to become angry” – James 1:19

Not only for spiritual ears but our natural ears as well.

It is safe to say that history has proven that we, the Church, tend to respond or react quickly, but this behavior will not benefit us much this coming season. There is significant testing in our character taking place, and we are being held accountable. Do we have the nature of Christ? Will the manifested love of Christ show through the way that we respond and in the way that we act? We must be slow to anger and quick to love.

The Lord and those we interact with are weighing our hearts.

“The Lord is merciful and gracious, Slow to anger and abounding in mercy.
He will not always strive with us, Nor will He keep His anger forever.
He has not dealt with us according to our sins, Nor punished us according to our iniquities.
For as the heavens are high above the earth, So great is His mercy toward those who fear Him;
As far as the east is from the west, So far has He removed our transgressions from us.” – Psalm 103:8-12

We are finding ourselves in many situations just as Jesus did, character and nature tested. We are ultimately being set up in those questions for what we say used against us. If we recount through the gospels, the religious and political nature of the Pharisees repeatedly tried to manipulate situations to disapprove of the nature of Jesus.

“Then He said to them, “What man is there among you who has one sheep, and if it falls into a pit on the Sabbath, will not lay hold of it and lift it out? Of how much more value then is a man than a sheep? Therefore it is lawful to do good on the Sabbath.” Then He said to the man, “Stretch out your hand.” And he stretched it out, and it was restored as whole as the other. Then the Pharisees went out and plotted against Him, how they might destroy Him.” – Matthew 12:11-14

“So they watched Him, and sent spies who pretended to be righteous, that they might seize on His words, in order to deliver Him to the power and the authority of the governor.
Then they asked Him, saying, “Teacher, we know that You say and teach rightly, and You do not show personal favoritism, but teach the way of God in truth: Is it lawful for us to pay taxes to Caesar or not?” But He perceived their craftiness, and said to them, “Why do you test Me?” – Luke 20:20-23

Even when the Pharisees brought Jesus the woman they caught in adultery, they intended to entrap Jesus to disprove Him. At that moment, instead of responding with anger or frustration, Jesus reminded them of the way of mercy. He leveled the playing field between their self-righteousness and her sin. Initially, Jesus acts as if He never heard the words of the Pharisees. It is not until after they ask the same thing multiple times that He finally acknowledges them.

Our actions and our responses will prophesy to the world of Jesus.

How we say a thing on behalf of the Lord is equally if not more important than what we say.

Moses was asked to strike the rock to get the water for God’s people, and he did. However, he did it in anger. His heart posture in his acting on behalf of the Lord made it appear that God was angry. He falsely and poorly represented the Lord’s heart and voice, leading to Moses not reaching his promise.

Moses Strikes the Rock
Then Moses and Aaron gathered the assembly together before the rock, and he said to them, “Hear now, you rebels: shall we bring water for you out of this rock?” And Moses lifted up his hand and struck the rock with his staff twice, and water came out abundantly, and the congregation drank, and their livestock. And the Lord said to Moses and Aaron, “Because you did not believe in me, to uphold me as holy in the eyes of the people of Israel, therefore you shall not bring this assembly into the land that I have given them.” These are the waters of Meribah, where the people of Israel quarreled with the Lord, and through them he showed himself holy. – Numbers 20:10-13

Moses Forbidden to Enter the Land
“And I pleaded with the Lord at that time, saying, ‘O Lord God, you have only begun to show your servant your greatness and your mighty hand. For what God is there in heaven or on earth who can do such works and mighty acts as yours? Please let me go over and see the good land beyond the Jordan, that good hill country and Lebanon.’ But the Lord was angry with me because of you and would not listen to me. And the Lord said to me, ‘Enough from you; do not speak to me of this matter again. Go up to the top of Pisgah and lift up your eyes westward and northward and southward and eastward, and look at it with your eyes, for you shall not go over this Jordan. But charge Joshua, and encourage and strengthen him, for he shall go over at the head of this people, and he shall put them in possession of the land that you shall see.’ – Deuteronomy 3:23-28

We are in a time where Jesus is going amongst His people and He’s checking for fruit, not signs, wonders and miracles, but He is looking for the fruits of the spirit. He is looking to see if we have love.

The greatest demonstration of power the earth has ever seen was the love that put Jesus on the cross and then rose Him from the grave just three days later.