I will Restore Back to You the Light of His Favor 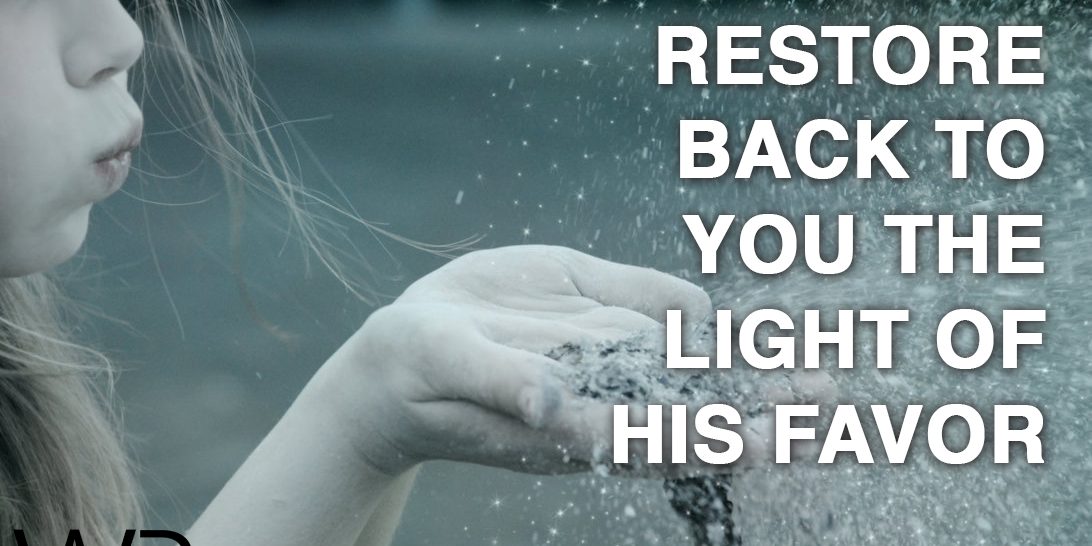 As I laid awake waiting to fall asleep a great light shined brilliantly over me, startling me. I could feel the the light not just in temperature but also in weight as if it was more than just light but the kabod glory of God. As this was occurring I thought to myself “I am encountering the Father of Lights right now.” I was completely captivated by this light because this was not a typical encounter for me, I tend to have more movie type visions.

Every good gift bestowed, every perfect gift received comes to us from above, courtesy of the Father of lights. He is consistent. He won’t change His mind or play tricks in the shadows.
– James 1:17

From within the light I heard a voice say to me “I am restoring to the light of His Favor” and Numbers 6:25 was quickened to me.

The Lord make his face shine on you and be gracious to you.
– Numbers 6:25

When I woke up that morning I woke up with a deeper understanding  of the happenings that were just only hours prior.

God is flooding our souls with light to expel all and any forms of shadows or darkness. Heaviness and depression will no longer be able to exist because there is an abundance of light. Where it once seemed dim and poorly lit you can expect the illumination of God to shine immensely and a radical change of countenance will take place for you. You will shine brightly once again and you will become a beacon of hope and restoration for others.

Arise, shine;
For your light has come!
And the glory of the Lord is risen upon you.
For behold, the darkness shall cover the earth,
And deep darkness the people;
But the Lord will arise over you,
And His glory will be seen upon you.
The Gentiles shall come to your light,
And kings to the brightness of your rising.
– Isaiah 60:1-3

The Coming Favor of the Beloved

There is coming a duality of favor for you in this season. The favor of man and the favor God. Each has it’s purposes and it’s benefits. In Luke 2:52 we see that even Jesus had to grow into the favor of God and man.

And Jesus increased in wisdom and stature,
and in favor with God and men.
– Luke 2:52

The favor of Man will open doors for you that normally would be closed and gain the appeal of those around you but this is because of the light, you will be highlighted to those around you. Because of the recent season you have been prepared to handle this attention, you were created for it! After all you are a carrier of His glory, it is as Jesus prayed:

Jesus spoke these words, lifted up His eyes to heaven, and said: “Father, the hour has come. Glorify Your Son, that Your Son also may glorify You,
– John 17:1

This is a reward for the wilderness season and a sign of it is coming to an end. He lured you out like Hosea so He could speak softly to you and now the time has come for all things to be restored.

Father I pray that your light would shine brilliantly upon each reader and that weightiness of your glory would rest upon them. Raise them up and put your affection for them on display. May you lift their heads, your winds blow away the debris of the past season, and they be refreshed for this new season. Pour out favor upon their lives by the buckets!